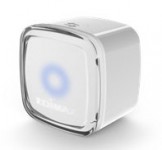 Savera Marketing announced the launch of Edimax latest World’s Smallest N300 EW7438PRn AIR Wi-Fi range extender, new solution to resolve wireless dead zones at home or office. N300 smart Wi-Fi extender with EdiRange App expands the Wi-Fi coverage of your existing network by up to 45 %. The device’s miniature size and AC plug wall-mounted design makes it easy to deploy around home or office. Placing the Universal Range Extender between main router and the area where additional Wi-Fi coverage is needed will yield the best results. It helps the internet users in India who need wider connection speed and more dispersed within a radius which is already specified.

Edimax EW-7438RPn AIR Universal Wi-Fi Extender is compact and can be plugged directly into an electrical outlet. With simple configuration setting, the device functions automatically. The signal performs on 2.4Ghz, which is defined according to the standard 802.11 b/g/n wireless and provides data transmission speeds of up to 300Mbps. It has a smart APP control for Wi-Fi scheduling, parental control and guest Wi Fi also. Application is free available on Google play-store and IOS apps store for user. The device will automatically shut down in night and reawakens in the morning.

Subir Mahapatra, Vice President at Savera Marketing said, “Having Wi-Fi is seen as a commodity today but achieving complete home coverage is still a challenge for many consumers. With people using multiple devices at home and offices, this is becoming an important challenge to address. With Edimax N300 Wi-Fi Range Extender, we offer people a smart solution that can be installed in minutes and boosts the signal and eliminates dead spots for multiple room and floors. “