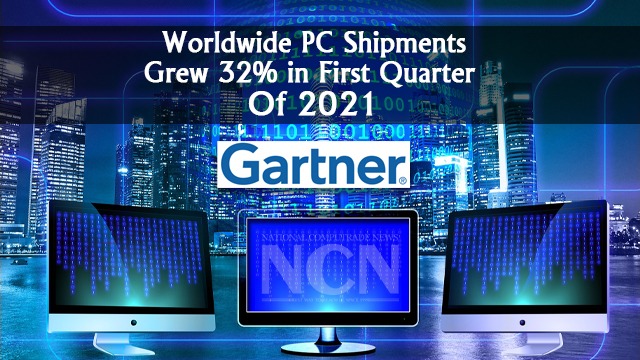 “This growth should be viewed in the context of two unique factors: comparisons against a pandemic-constrained market and the current global semiconductor shortage,” said Mikako Kitagawa, research director at Gartner. “Without the shipment chaos in early 2020, this quarter’s growth may have been lower. However, semiconductor shortages are now adversely affecting the supply chain once again, with shipment lead times for some PCs extending to as long as four months.

“While this may lead to lower shipment numbers, it is still reasonable to conclude that PC demand could remain strong even after stay-home restrictions ease. Moving forward, vendors and suppliers will be closely balancing the need to meet underlying demand without creating excess inventory.”

While Gartner does not include Chromebooks in its traditional PC market results, Chromebook shipments grew by triple digits in the first quarter of 2021, compared to a year ago, with growth primarily driven by investment among educational institutions in North America. Including Chromebooks, the total worldwide PC market grew 47% year-over-year.

The top three vendors in the worldwide PC market remained unchanged from the previous quarter, with Lenovo maintaining the top spot by shipments. All of the top six vendors experienced double-digit growth, and all, except Dell, gained market share compared to a year ago (see Table 1). 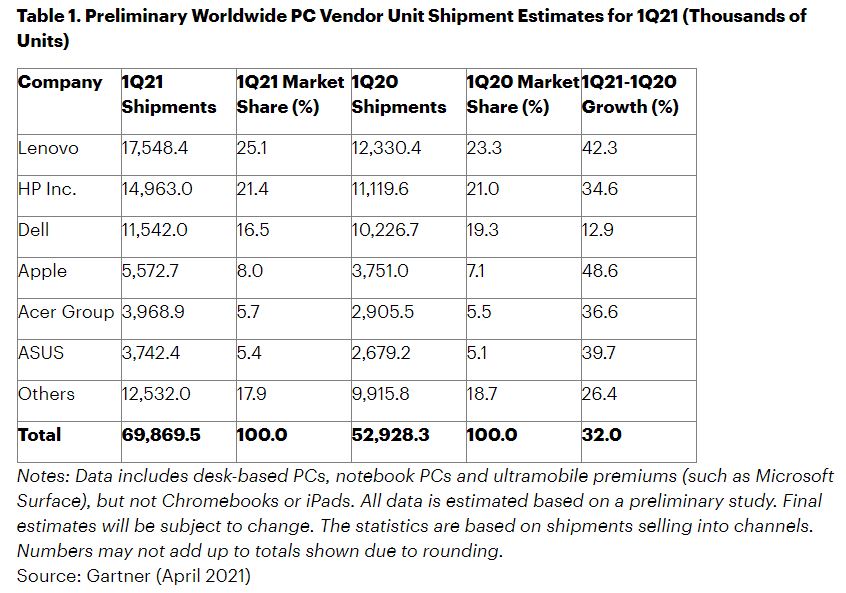 Lenovo recorded a 42.3% year-over-year growth, the highest among the among top six vendors. In contrast to HP and Dell, Lenovo increased shipments of deskbased PCs, largely due to high demand in China. Lenovo grew faster than the regional average in all key regions, with particularly strong growth in Asia Pacific (63.7%). The company also appeared to be more in control of their supply chain, as a higher percentage of its PCs are manufactured in-house compared to other vendors.

After two consecutive quarters of decline, HP achieved strong year-over-year growth of 34.6%. HP continued to gain traction in Latin America, recording over 60% year-over-year growth in the region. However, it should be noted that HP’s strong growth is attributed in part to a significant decline in 1Q20, as HP was the hardest hit by the supply chain disruption among of the top three vendors at the time.

Dell experienced the slowest growth among the top six vendors, largely due to the company’s focus on the business PC market, which did not experience as much growth as the robust consumer PC market. In light of component shortages and increasing freight costs, the company also pulled away from low-margin consumer products more than ever before.

The U.S. market saw strong growth of 24.1% compared to a year ago. Echoing global trends, shipments of deskbased PCs continued to decline but were offset by a robust mobile PC market, with mobile PCs showing 49% growth.

“The positive results in the U.S. reflect a more optimistic economic environment in 2021 compared to 2020 when the market experienced multiple uncertainties due to the pandemic, as well as political and social unrest,” said Ms. Kitagawa. 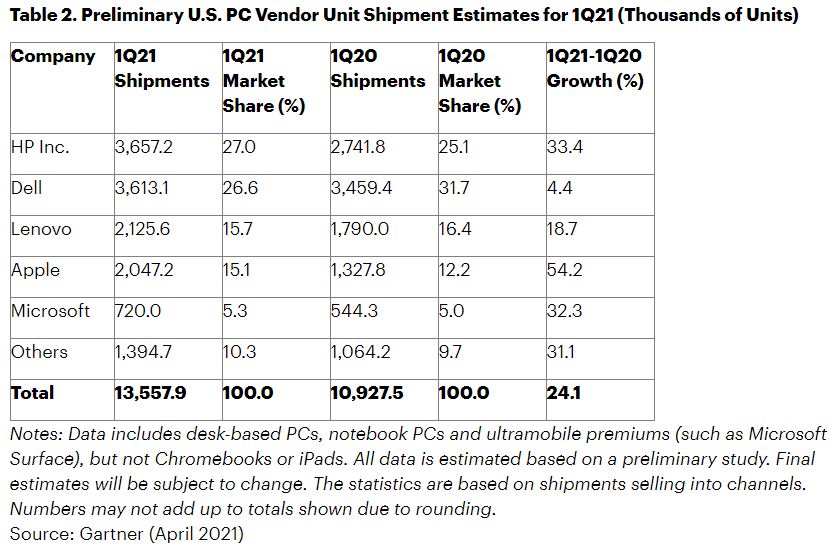 In the first quarter of 2021, the EMEA PC market was in line with worldwide growth trends, experiencing 30.9% year-over-year growth to 22.4 million units. The ongoing and, in some cases, increased lockdowns across multiple countries continued to fuel demand for notebooks and Chromebooks to support remote learning and consumer entertainment. Moreover, consumers are upgrading older systems to move beyond limitations such as short battery life, slower speeds and smaller screens.

The Asia Pacific PC market saw strong double-digit growth (37.6%) in the first quarter of 2021. While this figure is partially inflated due to a weak first quarter of 2020, healthy consumer demand and a rebound in desktops from business demands contributed to a strong market. In China specifically, the PC market experienced particularly high growth of 70% year-over-year.

These results are preliminary. Final statistics will be available soon to clients of Gartner’s PC Quarterly Statistics Worldwide by Region program. This program offers a comprehensive and timely picture of the worldwide PC market, allowing product planning, distribution, marketing and sales organizations to keep abreast of key issues and their future implications around the globe.