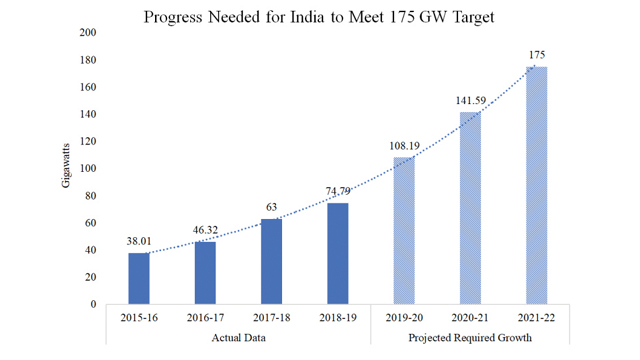 Solar power has so far played an almost non-existent role in the Indian energy mix. However, the market is set to grow significantly in the next ten years, driven mainly by rising power demand and prices for fossil fuels, the ambitious National Solar Mission (NSM), various state level initiatives, renewable energy quotas including solar energy quotas for utilities as well as by falling international technology costs. Encouraging the spread of solar power generation (both CSP and PV) and aiming for grid-parity (currently at around RS.5/kWh) by 2022 and parity with coal power generation (currently at around RS.4/kWh) by 2030, is a key element in India’s comprehensive, long term energy supply strategy. Keeping in view the solar annual insulation, solar power could therefore easily address India’s long-term power requirements. However, it has to be cost-competitive.

As of December 2011, solar power generation in India costs around RS.10/kWh, or over 2.5 times as much as power from coal. Importantly, it is crucial that the industry receives the right policy support to ensure that projects are executed and performed up to the mark.

India has a great potential to generate electricity from solar energy and the Country is on course to emerge as a solar energy hub. The techno-commercial potential of photovoltaics in India is enormous. With GDP growing in excess of 8%, the energy ‘gap’ between supply and demand will only widen. Solar PV is a renewable energy resource capable of bridging this ‘gap’. Most parts of India have 300 – 330 sunny days in a year, which is equivalent to over 5000 trillion kWh per year – more than India’s total energy consumption per year. Average solar incidence stands at a robust 4 – 7 kWh/sq.meter/day. About 66 MW of aggregate capacity is installed for various applications comprising one million industrial PV systems – 80% of which is solar lanterns, home/street lighting systems and solar water pumps, etc. The estimated potential envisaged by the Ministry for the solar PV programme, i.e. solar street/home lighting systems, solar lanterns is 20 MW/sq. kilometer.

The potential of the solar thermal sector in India also remains untapped. The Ministry of Renewable Energy proposes an addition of 500 MW during the phase 1 of JNNSM. Establishing manufacturing units at Export Oriented Units, SEZs or under the SIPS programme presents a good opportunity for firms which can leverage India’s cost advantage to export solar modules at competitive prices to markets in Europe and the United States.

In terms of all renewable energy, currently India is ranked fifth in the world with 15,691.4 MW grid-connected and 367.9 MW off-grid renewable energy based power capacity. India is among top five destinations worldwide for solar energy development as per Ernst & Young’s renewable energy attractiveness index.

Solar power is attractive because it is abundant and offers a solution to fossil fuel emissions and global climate change. Earth receives solar energy at the rate of approximately 1, 73, 000 TW. This enormously exceeds both the current annual global energy consumption rate of about 15 TW, and any conceivable requirement in the future. India is both densely populated and has high solar insulation, providing an ideal combination for solar power in India. India is already a leader in wind power generation. In solar energy sector, some large projects have been proposed, and a 35,000 km² area of the Thar Desert has been set aside for solar power projects, sufficient to generate 700 to 2,100 GW. 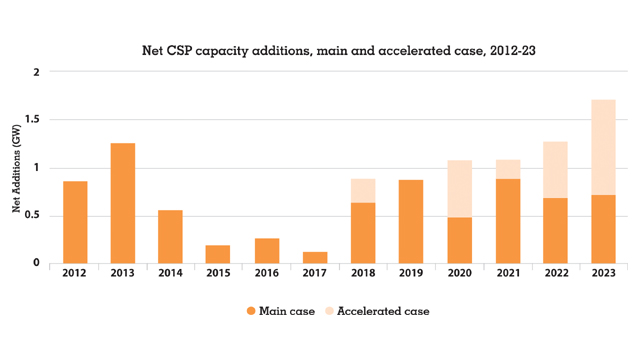 The India Energy Portal estimates that if 10% of the land were used for harnessing solar energy, the installed solar capacity would be at 8,000GW, or around fifty times the current total installed power capacity in the country. Daytime production peak coincides with peak electricity demand making solar ideal supplement to grid. With around 300 sunny days a year nationwide, solar energy’s potential in India is immense. And with $10.2 billion investments in clean energy, money is starting to follow the opportunity. India received $95 million in venture-capital funding and over $1.1 billion in large-scale funding for solar projects in 2011, according to a report by Mercom Capital, a clean-energy consulting firm. The biggest funding deal was a $694 million loan raised by Maharashtra State Power Generation Co. for its 150-MW Dhule and 125-MW Sakri solar projects.

The solar industry’s structure will rapidly evolve as solar reaches grid parity with conventional power. Solar will be seen more as a viable energy source, not just as an alternative to other renewable sources but also to a significant proportion of conventional grid power. The testing and refinement of off-grid and rooftop solar models in the seed phase will help lead to the explosive growth of this segment in the growth phase.

Global prices for photovoltaic (PV) modules are dropping, reducing the overall cost of generating solar power. In India, this led to a steep decline in the winning bids for JNNSM projects. With average prices of 15 to 17 cents per kilowatt hour (kWh), solar costs in India are already among the world’s lowest. Given overcapacity in the module industry, prices will likely continue falling over the next four years before leveling off. The cost of solar power could be as much as 15 percent lower than that of the most expensive grid-connected conventional energy suppliers. The capacity of those suppliers alone, nearly 8 GW in conventional terms, corresponds to solar equivalent generation capacity potential of 25 to 30 GW. Grid parity will be an inflection point, leading to two major shifts in the solar market. First, thanks to favorable project economics, grid-connected capacity will rise at a much faster rate than before, and second, regulations and policy measures will be refined to promote off-grid generation.

According to one estimates, the combination of electricity demand growth, fossil fuel cost and availability challenges, and supportive environmental regulations could increase solar power capacity to more than 50 GW by 2022. Lower solar costs combined with rising prices of grid power will convince offtakers (including distribution companies, private firms using open access, and firms putting up their own captive capacity) that solar power is economically viable. This shift will signal the start of the growth phase, during which grid-connected solar capacity will rise rapidly to about 35 GW by 2020 as developers build capacity to meet both RPO requirements and demand from offtakers seeking cost-efficient alternatives to conventional power.