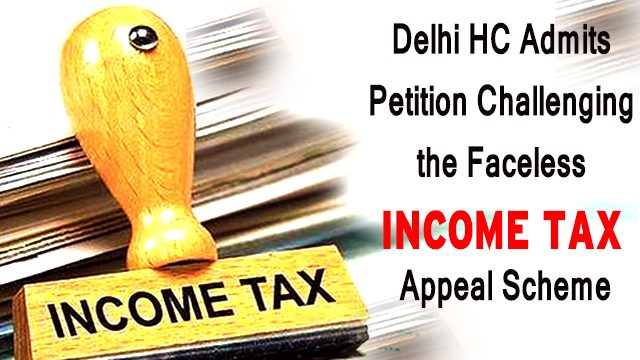 Within a month of its launch, Faceless Income Tax Appeal Scheme is under judicial scrutiny as Delhi High Court has allowed a petition challenging the scheme. The Court has reportedly issued notice to the Government and the matter will now be heard on December 15.

On Sep 25, the Centre launched ‘Faceless Income Tax Appeal’ to further ease compliance and reduce physical interface between the assessee and the Income Tax Department. It was said that out of 4.6 lakh appeals pending at the level of the Commissioner (Appeals) in the IT Department, about 4.05 lakh appeals (88% of the total) will be handled under the new mechanism. Almost 85% of the present strength of Commissioners (Appeals) will be utilized for disposing of cases under the faceless appeal mechanism.

In the petition, the petitioner asserts that the right of being heard, even through the video conferencing mode, will be subject to the approval of the Chief Commissioner or the Director General and therefore the same is discretionary, i.e. he ‘may’ or ‘may not’ provide a right of personal hearing in the matter. The petition also said that the right to provide or not to provide a hearing in the matter is also against the principle of audi alteram partem i.e. no person should be judged without a fair hearing in which each party is given an opportunity to respond to the evidence against them.

The petitioner sought a direction to the tax department to grant an opportunity of hearing to all taxpayers/assessee and to hold that the same is not at the discretion of the Chief Commissioner or the Director General as proposed in the scheme. He also prayed for a declaration that the scheme is discriminatory, arbitrary and illegal to the extent it provides a virtual hearing as per the circumstances to be approved by the administrative authorities under the Income Tax Act, 1961.

According to one expert, right since introduction of the scheme, taxpayers have been apprehensive about efficacy of this system, as income tax appeals often involve complex issues that may not be sufficiently explained based on written submissions alone and a personal explanation may be required before the appellate authority. However, under the new system, an opportunity to make personal representation through video conferencing would require prior permission of the Principal Chief Commissioner/ Director General and involves an element of discretion in this fundamental right provided under the law to an appellant Taxpayer.