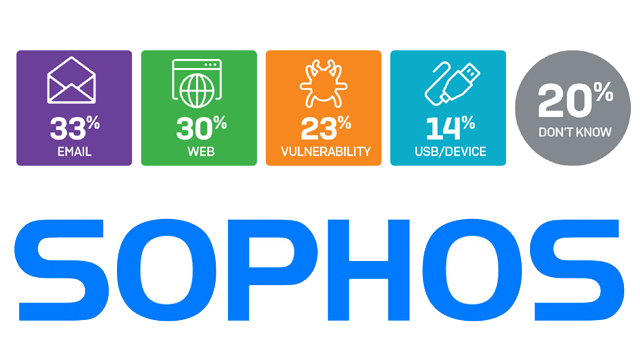 This survey interviewed 3,100 IT decision makers in 12 countries and across six continents in the US, Canada, Mexico, Colombia, Brazil, UK, France, Germany, Australia, Japan, India, and South Africa. All respondents were from organizations with between 100 and 5,000 employees.

Sophos announced the findings of its global survey, The Impossible Puzzle of Cybersecurity, which reveals IT managers are inundated with cyberattacks coming from all directions and are struggling to keep up due to a lack of security expertise, budget and up to date technology. The survey polled 3,100 IT decision makers from mid-sized businesses in the US, Canada, Mexico, Colombia, Brazil, UK, France, Germany, Australia, Japan, India, and South Africa.

Cybercriminals Use Multiple Attack Methods and Payloads for Maximum Impact

The Sophos survey shows how attack techniques are varied and often multi-staged, increasing the difficulty to defend networks. One in six IT managers surveyed didn’t know how they were breached, and the diversity of attack methods means no one defensive strategy is a silver bullet.

“Cybercriminals are evolving their attack methods and often use multiple payloads to maximize profits. Software exploits were the initial point of entry in 41 percent of incidents, but they were also used in some fashion in 35 percent of all attacks, demonstrating how exploits are used at multiple stages of the attack chain,” said Sunil Sharma, managing director sales, Sophos India & SAARC. “Organizations that are only patching externally facing high-risk servers are left vulnerable internally and cybercriminals are taking advantage of this and other security lapses.”

The wide range, multiple stages and scale of today’s attacks are proving effective. For example, 54 percent of those who fell victim to a cyberattack were hit by a phishing email, 39 percent by ransomware and 48 percent said they suffered a data breach.

Based on the responses, it’s not surprising that 50 percent of IT managers consider software exploits, unpatched vulnerabilities and/or zero day threats as top security risks, while 43 percent consider phishing as a security risk.

The Impossible Puzzle of Cybersecurity survey was conducted by Vanson Bourne, an independent specialist in market research, in December 2018 and January 2019. This survey interviewed 3,100 IT decision makers in 12 countries and across six continents in the US, Canada, Mexico, Colombia, Brazil, UK, France, Germany, Australia, Japan, India, and South Africa. All respondents were from organizations with between 100 and 5,000 employees.

Despite heavy and ongoing investment in cybersecurity technology, the job for IT teams across the globe isn’t getting any easier. Rather than continuing further with the same approach to cybersecurity, it’s time to move to cybersecurity as a system. By enabling security products to share information and work together in real time you can stay ahead of the threats while also freeing up valuable IT resources.

o Software exploits were the initial cause of 41 percent of incidents and used in 35 percent of cyberattacks, demonstrating how exploits are used at multiple stages of the attack chain