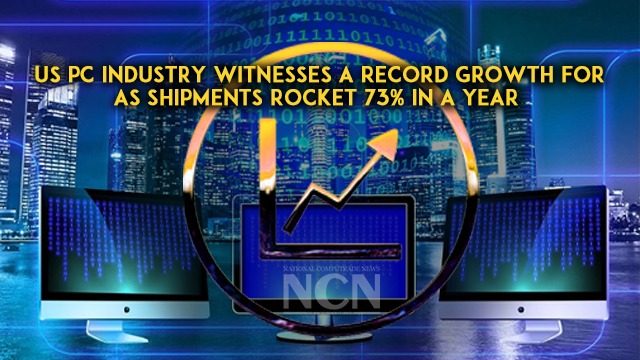 According to Canalys Report, the US PC market has seen a surge with total shipments of desktops, notebooks, tablets, and workstations exceeding 34 million units. The surge has been due to the growth in notebooks and tablets although the desktops had shown a weak demand during pandemic. 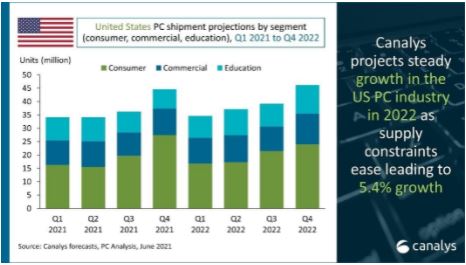 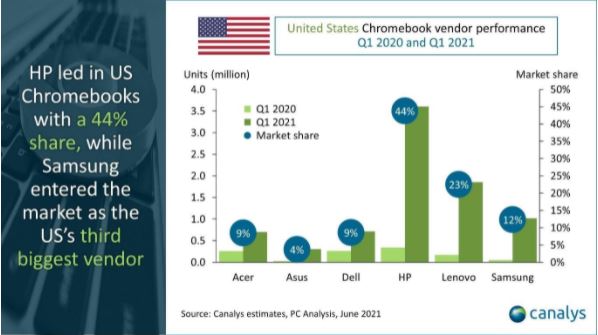 According to the report, the HP is the first vendor to lead the others in the US with over 7 million devices shipped in the region, driven by fulfilling commercial backlogs and strong Chromebook performance. For the first time since Q3 2019, Apple lost its position as the top PC vendor in the US (including tablets), despite posting 36% growth. Nevertheless, Apple performed well considering Q1 tends to be a weaker quarter for Mac and iPad shipments.

Lenovo and Samsung both recorded incredible growth at 93% and 116% respectively. Lenovo is second and followed by Samsung. Much of the record-breaking growth over the past year occurred due to the surge of Chromebooks for education alongside 92% year-on-year growth in the consumer segment. Third-placed Dell saw shipments increase by a relatively modest 29%, due to its weaker position in the consumer and education segments.

According to Lynch, the analysts at Canalys, chrome books have shown the fastest-growing category in the US in Q1 and the platform had seen unprecedented growth over the past year in the US, spearheaded by its dominance in the education space.

The US market for Chromebooks has grown by 548% over the past year. Samsung led US Chromebook vendors in growth with an astounding 1,963% growth over the past year as it made its entrance in the US market. Despite this, Chromebook growth was shared among most US vendors, with ASUS, HP and Lenovo each posting rises of over 900%. Ongoing investments in digital education mean that the trends seen in this segment will continue in the long term.

“There is no return to normal for education,” said Ishan Dutt, Senior Analyst at Canalys. “The PC’s role in the classroom will remain strong for years to come, ensuring ongoing demand for Chromebooks. The growing Chromebook installed base will lead to consistent upgrades and support for the product line. Educational institutions, teachers and parents have made investments in digital curricula and processes that they will not want to abandon.”

Remote working and home schooling over the world have attributed to the increase in chromebooks and PCs in US.