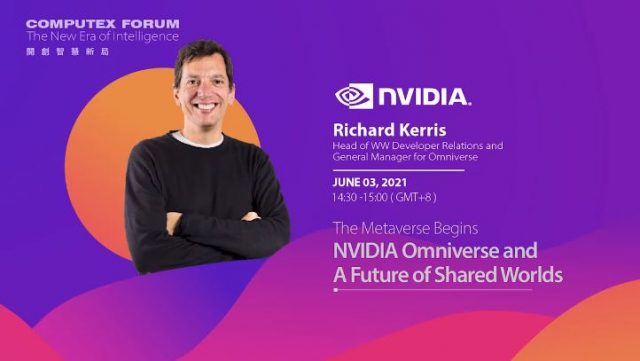 Richard Kerris, GM of NVIDIA Omniverse defines what the Metaverse means to NVIDIA, how Omniverse is helping to connect it, the platform’s impact on key industries and workflows, and a vision for the future of collaboration and simulation.

NVIDIA Omniverse, the revolutionary new platform for virtual collaboration and simulation. Omniverse is enabling individuals and companies across multiple industries to address the challenges of complex 3D workflows by connecting users, content creation tools, and enabling artificial intelligence to be used across shared virtual worlds.

Richard Kerris says, “3Dworkforce has become important in all sorts of industries like architectural & design, visual effects and game developers who are designing products that they want to visualise before they commit to the physical world. Robotics and automation. Omniverse was developed on USD, this dynamic connection gives the sum is greater than its parts what we are doing in space. Bentley is building the digital twin on Omniverse platform.

In a typically wide-ranging and mind-expanding discourse Wednesday morning in Taiwan, Huang suggested that advancements in deep learning and natural language understanding are driving AI to new levels. “…Using machines, you could write software that no humans possibly can,” he said, adding, “There’s a whole bunch of different algorithms that are associated with deep learning, but there’s no question that we can now write software that we would not have been able to write before. And so we can automate a whole bunch of things that we never thought were going to be possible in our generation.”

Omniverse provides the ultimate shortcut for integrating NVIDIA technologies and services to your users and with the least amount of effort. Created around USD, Omniverse transfers only deltas between applications allowing for real-time interactions. The Omniverse platform is built on modularity and performance in mind. Create extensions, micro-services or complete applications using Omniverse Kit.

NVIDIA Omniverse transforms workflows in industries where breath taking, photorealistic, ray-traced rendering is the soul of the design. The platform is flexible, customizable, and continuously enhanced with new Omniverse Apps, Extensions, and Connectors.

Omniverse consists of 5 key parts: Nucleus, Connect, Kit, Simulation and RTX Renderer. These components along with connected third party digital content creation (DCC) tools and additional connected Omniverse microservices make up the full Omniverse ecosystem.Omniverse enables universal interoperability across different applications and 3D ecosystem vendors. It provides efficient real-time scene updates and is based on open-standards and protocols. The Omniverse Platform is designed to act as a hub, enabling new capabilities to be exposed as microservices to any connected clients and applications.