First 3 being Kingston, Adata and Tigo

The Total WW shipments of branded SSDs bound for the channel (retail) market in 2019 reached 131 million units, showing an increase of almost 60% from 2018, according to TrendForce, Inc.

The ranking of SSD module makers for 2019 is based on the same criteria as before. Specifically, the shipment calculation only takes account of products that are bound for the channel market and under brands owned by manufacturers themselves (including brands licensed from third parties). NAND flash suppliers are excluded from the ranking in order to provide a better comparison of the shipment shares of the world’s top 10 branded SSD module makers. 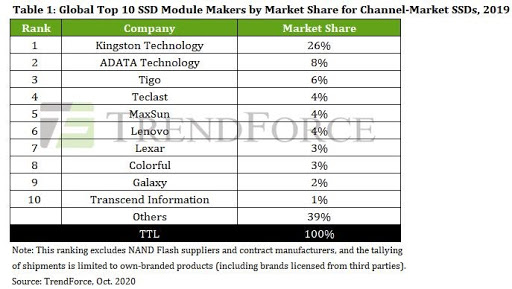 Together, the top 10 accounted for around 61% of the total WW shipments in 2019. Looking at the channel market for SSDs as a whole, NAND flash suppliers (including Samsung, Kioxia, WDC, Micron, SK Hynix, and Intel) accounted for around 35% of the total shipments in 2019. The shipment share of SSD module makers (encompassing manufacturers of branded and white-box products) came to around 65% for the same year.

Kingston exploited the continuing slide in the overall ASP of NAND flash and operated vs. headwinds. Also, it has an extensive global network of sales channels, and its product support service is well developed. All these factors contributed to the cementing of the company’s position as the leader in the global shipment ranking, with a 26% market share in 2019.