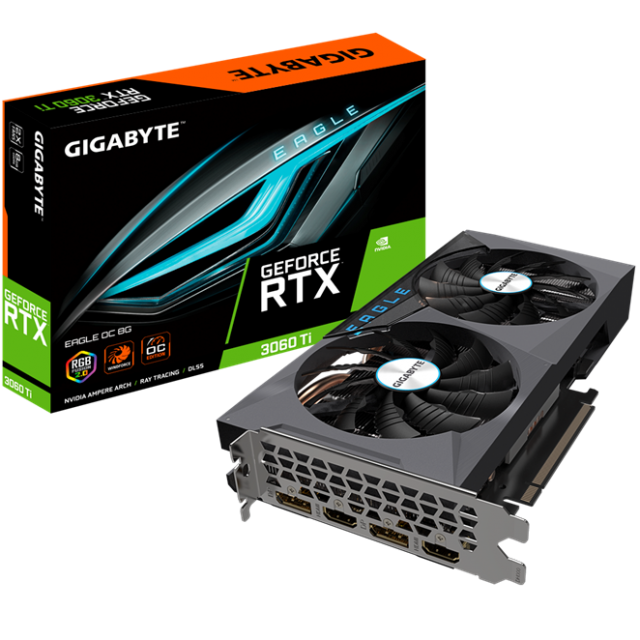 Powered by the NVIDIA Ampere architecture and the 2nd generation of NVIDIA RTX, the world’s most powerful PC gaming platform for real-time ray tracing and AI, the GeForce RTX™ 3060 Ti delivers blistering 1080p and 1440p gameplay.

The RTX 3060 Ti also supports the trifecta of GeForce gaming innovations too, including performance-accelerating and IQ-enhancing NVIDIA DLSS technology which is now available in over 25 games; NVIDIA Reflex which reduces system latency (‘input lag’), making games more responsive, and giving players in competitive multiplayer titles an extra edge over the opposition; and NVIDIA Broadcast, a suite of audio and video AI enhancements including virtual backgrounds and noise removal that users can apply to chats, Skype calls and video meetings. So whether they’re playing traditional PC titles, powering through creator and productivity workflows, or marveling at the latest cutting-edge ray-traced titles like Cyberpunk 2077, Call of Duty: Black Ops Cold War, Watch Dogs: Legion, and more, the GeForce RTX™ 3060 Ti delivers the best possible experience in its class for everyone everywhere.

The MAX-Covered Cooling features 3x 100mm unique blade stack fans with wind claw design and alternate spinning, so the air pressure can completely cover the heatsink. The heat dissipation area of the heat-sink is more than the previous generation. And with the big copper plate and 7 composite heat-pipe, the heat of the GPU and VRAM can be dissipated quickly. Coupled with GIGABYTE’s Screen cooling technology, the extended fins allow air flow to pass through, forming an extremely efficient heat dissipation system, so that the GPU can operate stably. A powerful LCD monitor is embedded on the side of the graphics card, which can be set to enthusiastic mode, text mode, image mode and GIF mode. Through the software, you can edit all kinds of content that you like, or set it as CHIBI Time to enjoy the changes of the little falcon every hour. RGB Fusion 2.0 allows you not only to set the lighting effects of the entire graphics card and LCD monitor, but also to synchronize the lighting with other AORUS devices. AORUS MASTER also features 6 video output connectors, aerospace-grade PCB coating, Dual BIOS quiet operation mode, and ULTRA DURABLE certified components. It is recommended for enthusiasts who want the ultimate performance and colorful RGB appearance. AORUS provide customers with a 4-year warranty (requires online registration within 30 days of the purchase date) so that customers can enjoy the game or create without any worry.