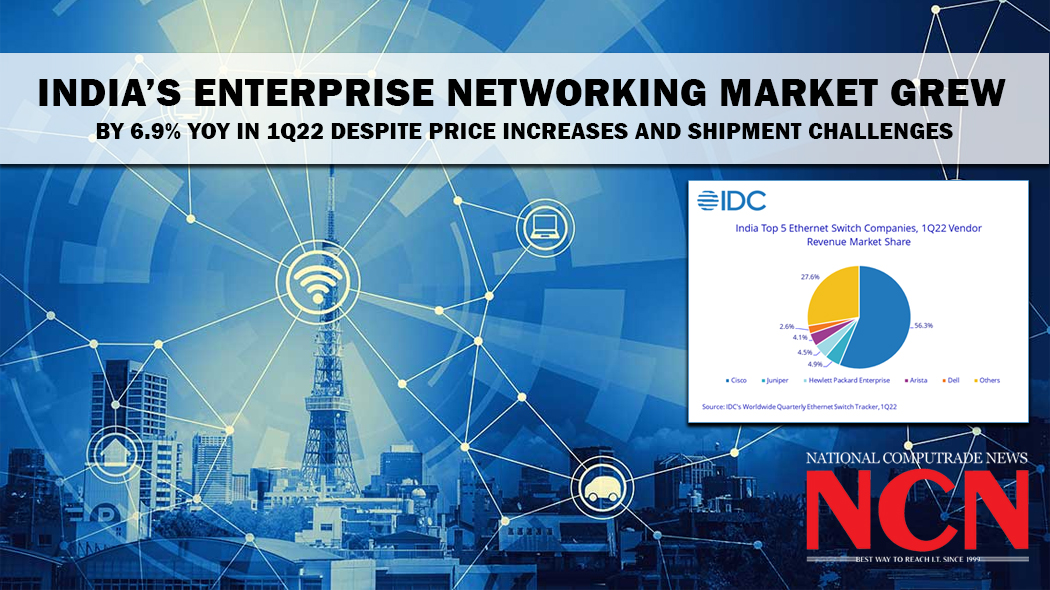 The networking vendor ecosystem continued to witness challenges regarding component shortages coupled with increasing logistics costs and a weakening rupee against the dollar. Though the YoY growth was recorded at 6.9%, the average cost of all networking equipment has had low double-digit percentage growth thereby softening the number of units shipped. The lead time of shipment of network equipment is currently in the tune of 30-35 weeks. With the Russia-Ukraine conflict prolonging, the lead times are expected to remain the same for at least three quarters from now. IDC expects the next few quarters to have steady market growth as vendors try to clear their shipment backlogs.

India’s router market declined by 14.7% in 1Q22. Service Providers contributed to 63.4% of the router investments. Both, enterprise as well as service provider routing, faced a decline with enterprise taking a strong fall of 26.4% and service providers declining by 6.1%. Apart from telecom other key verticals for routing include finance, services, and manufacturing.

WLAN segment witnessed a growth of 9.1% YoY in 1Q22. While the enterprise WLAN grew strongly with pent-up demand from organizations coming through, the consumer wireless demand softened with offices reopening in the country. Enterprise WLAN segment exhibited a very strong 38.5% YoY growth while consumer WLAN declined by 20.8% YoY. Cloud-managed wireless had a good uptake in India owing to ease of deployment and manageable

The 1Q22 Ethernet Switch market in India stood at USD 156.8 million (by vendor revenue) registering a strong YoY growth of 17.6%. The steady revenue growth of revenue was majorly due to vendors clearing their backlogs that now extend between 8-12 months. Switching was the most affected category owing to the component shortages. Services industry was the top contributor owing to investments around hybrid work and enterprises pre-planning their infrastructure demand amid the shipment delays. The enterprise investment on non-DC switching grew at a 14.2% YoY. The DC switching segment grew at 22.5% YoY majorly due to the one-time slump last year (1Q21). Services, finance, manufacturing, telecom, and government were the top contributors during 1Q22