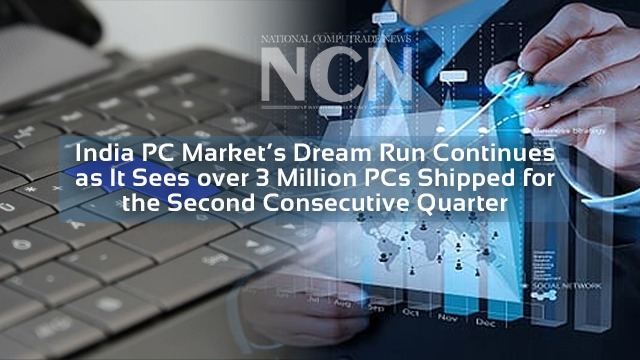 -
The India traditional PC market (inclusive of desktops, notebooks, and workstations) continued to be robust as the shipments grew by 50.5% year-over-year (YoY) in 2Q21 (Apr-Jun), according to new data from the International Data Corporation (IDC) Worldwide Quarterly Personal Computing Device Tracker. A total of 3.2 million PCs were shipped in the quarter, with all product categories reporting strong double-digit growth. In the absence of any large education and government deal, this was the second consecutive quarter when India’s PC market saw shipments of over 3 million PCs, underlining the growth in the enterprise, SMB, and consumer segments. Notebook PCs continue to hold more than three-fourth share in the overall category and grew 49.9% YoY in 2Q21, reporting a fourth consecutive quarter with over 2 million units. Desktops also indicated a recovery as shipments grew 52.3% YoY after recording the lowest shipments of the decade in 2Q20.The second wave of COVID-19 further delayed the opening of schools and colleges, strengthening the demand for PCs for home learning. In 2Q21, the consumer segment grew 118.4% YoY, and 5.9% sequentially as vendors prepared the channel in anticipation of stronger demand. The commercial segment grew 13.8% YoY in 2Q21 as the enterprises, especially the IT and IT-enabled services companies, continued buying to manage the growing workforce in the ongoing work from home scenario. Moreover, the demand from SMBs also supported the growth of the commercial segment as it grew 61.2% from the same time a year ago. “Despite the country being severely impacted by the second wave of COVID-19, there was a sense of optimism in the market as vendors utilized the time to procure devices to assure channel availability from their end,” said Bharath Shenoy , Market Analyst, PC Devices, IDC India. He further added, “Channel partners were struggling with low inventories and backlogs for almost a year; this came as a breather for a few vendors as they were able to add a few more weeks’ inventories to their channel. However, as demand continues to outstrip the supply, it doesn’t seem that the channel inventory will return to normal before the year-end.” Top Five Company Highlights: 2Q21  HP Inc. reported second quarter in a row with over a million shipments. It maintained its lead in the India PC market with a 33.6% share as its shipments grew 54.2% annually. HP shipped over half a million notebooks in the consumer segment, registering the highest shipments in the consumer notebook segment in a quarter by any vendor in India. Better allocation to the country and timely supplies helped the vendor to further widen its lead in the PC category. Dell Technologies continued to hold the second position with a 22.1% share and impressive 86.1% YoY growth in 2Q21. In the commercial segment, with a share of 29.6%, it placed close behind HP in the second position. Also, it retained its third position in the consumer segment as its shipments grew 161.9% YoY in 2Q21. Lenovo maintained the third position with a share of 17.8% in 2Q21. However, it did witness a marginal decline in its overall shipments due to the delayed supplies in the country. Nevertheless, it retained its second position in the consumer segment as its shipments saw a 28.8% yearly growth in 2Q21. Acer Group retained the fourth position with an 8.7% market share in 2Q21. The vendor witnessed a YoY growth of 31.6%, primarily driven by strong performance in the consumer notebook segment as its shipments almost tripled from the same time a year ago. Acer also shared the leading position in the commercial desktop category with HP, with a share of 24.6% in 2Q21. Apple tied with ASUS in the fifth position for the second quarter in a row. It continued its strong performance and managed to ship more than 100 thousand units for the fourth quarter in succession. ASUS shipments grew 39.8% YoY in 2Q21 as it observed positive traction in both consumer and commercial segments. The vendor returned to the fourth position in the consumer segment with a share of 8.9% in this quarter and registered 37.5% growth from the same quarter a year ago.
- Advertisement -