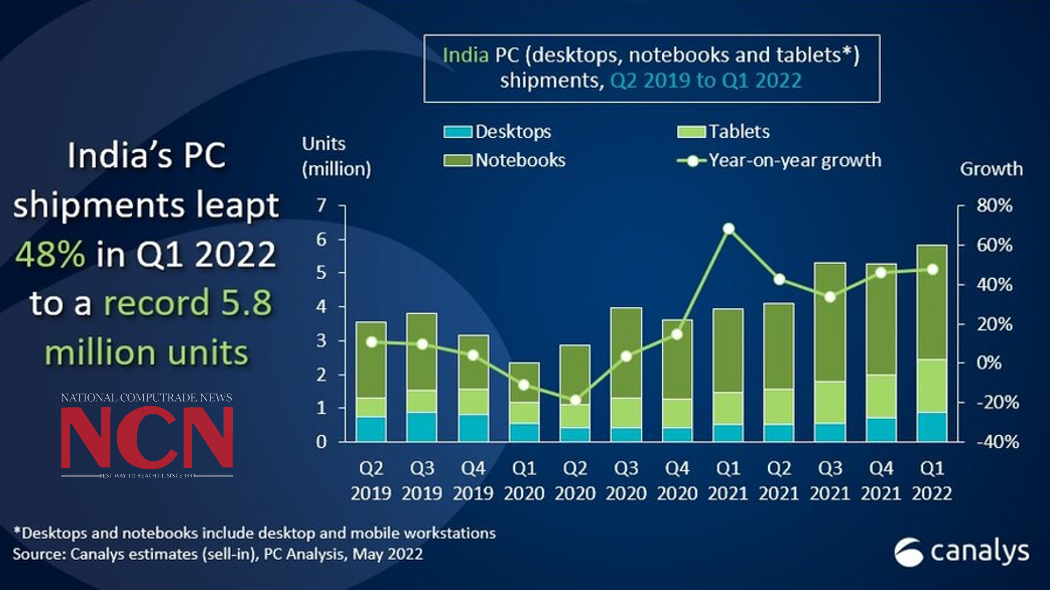 India’s PC shipments (desktops, notebooks and tablets) rocketed by 48% in Q1 2022 to a record-breaking 5.8 million units, beating the previous record of 5.3 million in Q3 2021. In the last six quarters, shipments have grown by 44% on average, despite sustained pressure on the global supply chain. They have now surpassed the 5 million-mark for a third quarter in a row. India now accounts for 5% of global PC shipments, compared with just 3% two years ago. Notebooks were the largest category, with 3.4 million units shipped, up 36% year on year. Desktop shipments surpassed 880,000 units, a phenomenal 64% increase over Q1 2021. But tablets were the strongest category, with shipments reaching 1.6 million, up 69% on a year ago, largely due to government orders picking up again after a two-year hiatus.

“There are two main reasons for India’s phenomenal performance this quarter,” said Jash Shah, Research Analyst at Canalys. “Firstly, India’s success at managing COVID-19, despite its huge population, has to be recognized. While most of the world was in lockdown, India remaining open for business as usual to a large degree. This helped the economy resurge, creating additional demand for PCs and other IT infrastructure. Secondly, India is slowly but surely inching toward self-reliance in PC production. 18% of all PCs sold in India are now manufactured locally, implying that India’s vulnerability to black swan events in China is diminishing, and that its own appetite for PC consumption is increasing. While global macroeconomic events are raising multiple concerns over the sustainability of this growth, India will stay strong for the coming few quarters, despite the softness expected in other global markets.”

“Inflation woes continue to plague the market in 2022, as unprecedented global food prices have sent local prices soaring, with average inflation over 6% for the past three months,” added Shah. “With the Reserve Bank of India pushing up base lending rates, which are expected to continue to increase through the year to battle wholesale inflation, businesses in debt will feel the crunch, as they have less capital to work with. While consumers will stop making discretionary purchases, companies, both small and large, have shown an inclination to freeze budgets, stop hiring and cut spending, which will have a ripple effect on IT procurement, and thereby PC demand. Canalys advises PC vendors to exercise caution while planning for the quarters ahead. At the same time, large government tenders for education are expected to keep the market buoyant.