“HP Slate VoiceTab and Slate VoiceTab are engineered for the way they multitask and stay connected. These devices deliver performance people can trust – it’s more than a tablet and smarter than a phone.” 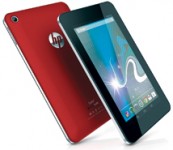 Speaking at the event, Rajiv Srivastava, vice president and general manager, Printing and Personal Systems, HP India said, “India’s next generation needs next generation tools – the HP Slate VoiceTab and Slate7 VoiceTab are engineered for the way they multitask and stay connected. These devices deliver performance people can trust – it’s more than a tablet and smarter than a phone.”

HP announced the talented and successful Indian film star, Deepika Padukone as its brand ambassador. Speaking about the association with HP, Deepika Padukone said, “I feel proud to be a part of the HP family. HP products are innovative, performance-driven and easy to use especially when on the move. This is exactly what I want from my devices. I have been using the new HP Slate6 VoiceTab for some time now and think it’s a must-have for anyone who wants performance and style.”

The new HP Slate VoiceTabs come with a range of exciting and useful applications preinstalled, including    HP Connected Music for downloading and streaming music;  HP Box Storage with free 25GB Cloud Storage for documents and files;   HP ePrint application to Print wirelessly with a HP ePrint enabled printer;    HP Connected Photo for managing and storing your photographs;  Exciting tailor-made offers from MakeMyTrip, India Today Group and Bagittoday;     Kingsoft Office to open Office files such as Word and Excel and    Skype and WeChat for instant messaging.