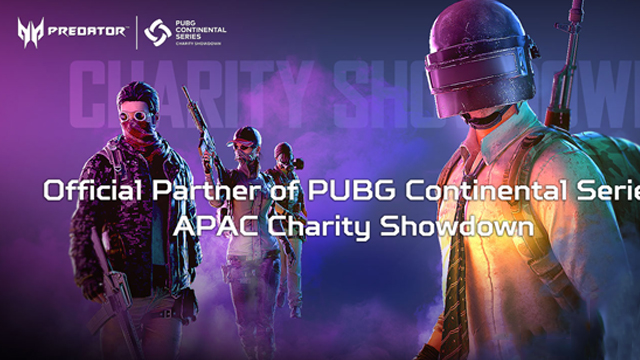 Acer Predator announced that it is the official sponsor for PUBG Continental Series (PCS) APAC Charity Showdown. Acer Predator and PUBG Corporation are coming together to encourage esports fans to enjoy the tournament while maintaining social distancing during the continued COVID-19 pandemic.

Acer will be providing a suite of devices from its line of gaming devices to support the PCS APAC Charity Showdown.

l   The Predator Helios 300 equips gamers with powerful internals, custom-engineered cooling tech, and up to a 240Hz display to obliterate the competition.

l   The Predator Orion 5000 is a monolithic gaming desktop armed to the teeth with top-of-the-line components for gamers craving the ultimate in performance.

l   The Predator XB253 GX is a G-Sync Compatible FHD IPS monitor with up to a 240 Hz refresh rate that’s all about making games come to life on the screen.

“Predator is always looking for opportunities to support gamers and promote esports around the world,” said Andrew Hou, President of Acer Pan Asia Pacific Regional Operations. “We’re excited to work with PUBG Corporation to host this charity event, giving players a chance to express their passion for the game while giving back to the community during this challenging time.”

Commenting on this initiative, Chandrahas Panigrahi, CMO & Consumer Business Head, Acer India said, “We are privileged to join hands with PUBG Corporation to announce this charity tournament in the APAC region. As COVID-19 has affected a lot globally, such initiatives are the need of the hour and will provide an opportunity for top PUBG teams to showcase their skills and give back to the community. This kind of event shows how much PUBG and PC gaming have grown and is now in a position to support the communities at large during such a crisis.”