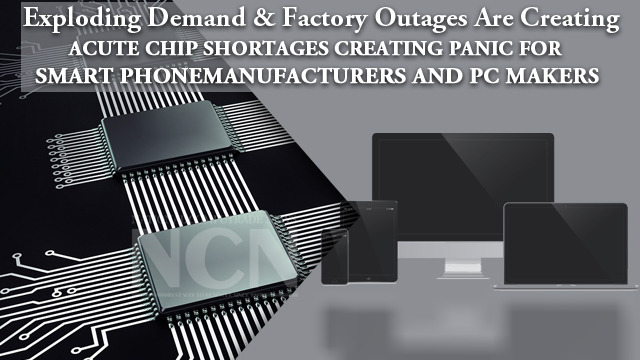 There have been reports which state that the shortages in the semiconductor industry is likey to be there till 2022. The shortage has already slammed automakers and consumer electronics companies, are getting even worse, complicating the global economy’s recovery from the coronavirus pandemic.

The first hints of trouble emerged in the spring of 2020. The world was in the early throes of a mysterious pandemic, which first obliterated demand then super-charged internet and mobile computing when economies regained their footing. That about-face — in a span of months — laid the seeds for potentially the most serious shortage in years of the semiconductors that lie at the heart of everything from smartphones to cars and TVs.

Auto and electronics makers that cut back drastically in the early days of the outbreak are now rushing to re-up orders, only to get turned away because chipmakers are stretched to the max supplying smartphone giants like Apple Inc.

According to the reports chip lead times, the gap between ordering a chip and taking delivery, increased to 17 weeks in April, indicating users are getting more desperate to secure supply, according to research by Susquehanna Financial Group. 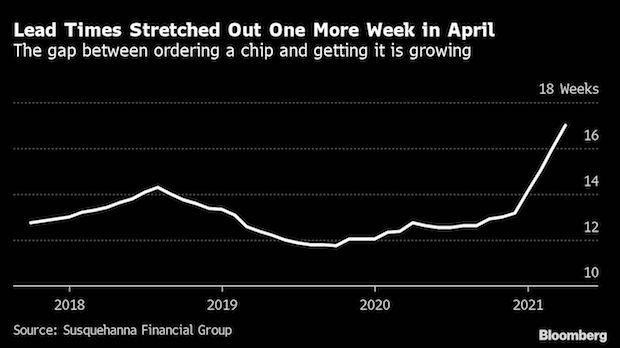 Graph showing wait time between ordering and getting a chip. (Graph: Bloomberg)

According to  Susquehanna analyst Chris, the citing power management and the analog chip lead times among others. The chip shortages are rippling through industry after industry, preventing companies from shipping products from cars to game consoles and refrigerators.  Automakers are now expected to lose out on $110 billion in sales this year, as Ford Motor Co., General Motors Co. and others have to idle factories for lack of essential components.

The chip industry and its customers watch lead times as an indicator of the balance between supply and demand. A lengthening of the gap indicates that buyers of semiconductors are more willing to commit to future supply to avoid a recurrence of shortfalls. Analysts track these numbers as a harbinger of hoarding that can lead to the accumulation of too much inventory and sudden declines in orders.

According to Mr. Rolland, the elevated lead times often compel ‘bad behavior’ at customers, including inventory accumulation, safety stock building, and double ordering,”  and these trends may have spurred a semiconductor industry in the early stages of over-shipment above true customer demand.

The situation has been complicated by a resurgence of coronavirus cases in Taiwan, a key location for chip manufacturing. The country has closed schools, curbed social gatherings, and shut museums and public facilities. While businesses and factories are operating, the government may have to consider broader restrictions.

The country is home to Taiwan Semiconductor Manufacturing Co., which is the world’s most advanced chipmaker and counts Apple Inc. and Qualcomm Inc. among its many customers. Local manufacturers also produce less glamorous — but equally critical — chips, such as display driver ICs that have been a particularly painful bottleneck for global production.

The current level of 17 weeks climbed from the 16-week level and marks a fourth consecutive month of “sizable” expansion, Rolland wrote.

Lead times for certain products are increasing sharply, even after months of shortages. Power management chips, for example, spiked to 23.7 weeks in April, a wait time about four weeks longer than a month earlier, according to Susquehanna.

Industrial microcontrollers order lead times extended by three weeks, some of the steepest increases Rolland has seen since he began tracking the numbers in 2017, he wrote.

Delays are often worse for smaller manufacturers, with headphone makers facing lead times longer than 52 weeks, according to people familiar with the supply chain. This has forced companies to redesign products, shift priorities and, in at least one case, completely abandon a project, said one of the people, asking not to be named because the information is not public.

Now let us see how India can combat the situation.