The Government of India kick started the use of IT in the government in the right earnest by launching number of initiatives. First the Government approved the National E-Governance Action plan for implementation during the year 2003-2007. The plan is an attempt to lay the foundation and provide impetus for long -term growth of e-governance within the country. It proposed to create the right governance and institutional mechanisms at the center, state and local levels to provide a citizen centric and business centric environment for governance. The Government has given approval in-principle to the plan and overall programme content; implementation approach and governance structure. While endorsing the plan, it was observed that: weightage must be given for quality and speed of implementation in procurement procedures for IT services; suitable system of motivating the states for quick adoption be incorporated; provision of delivery of services to the citizens through a single window should be encouraged; Out sourcing of services wherever and whenever feasible; efforts be made to promote and develop public private partnerships to utilize the full potential of private sector investments; and connectivity should be improved and extended up to the block level in the states.

Apart from the action plan, measures have also been introduced like adoption of “Information Technology (IT) Act, 2000 by the Government of India to provide legal framework to facilitate electronic transactions. The major aims of this act are to: recognize electronic contracts, prevents computer crimes, and make electronic filing possible. The Act came into force on 17 October, 2000. Establishment of the National Taskforce of Information Technology and Software Development in May 1998. Creation of Centre for e-governance to disseminate the best practices in the area of e- governance for the use by the Central and State Governments and act as a nodal center to provide general information on e-governance, national and international initiatives and IT policies of the government. Developing e-office solutions to enable various ministries and departments to do their work electronically. Modules such as Work flow for Drafts for Approvals, e-file, e-notings, submission of reports, integrated personal information and financial accounting systems have been developed. Setting up of a High Powered Committee (HPC) with Cabinet Secretary as its Chairman to improve administrative efficiency by using Information Technology in Government. Designating a Joint Secretary level officer as IT manager in every Ministry/ Department; and Instituting websites by almost all Ministries and Departments and providing information on aspects such as their objectives, policies and decisions, contact persons, etc. Some of them have started their electronic newsletter for giving publicity to their activities on wider scale; and identifying departments, which have frequent inter-face with the citizens, and computerizing them on priority basis.
Thus, it can be inferred from the above that a good beginning has been made to make e-government a reality in India, but still a lot needs to be done. Sincere efforts are required on sustained basis in future also to maintain the momentum 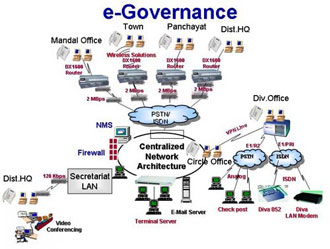 Quite a number of state governments have initiated measures to introduce information technology and its tools in the governance process. Most of these states are using these applications for improving service delivery to their citizens. They are moving from manual processes to on-line delivery by using conveniently located service centers in public places. Counters at these service centers are manned by public/ private agencies and multiple services are provided on-line at each location. Empirical evidence reveals that it has not been an easy task to implement ICT related reforms particularly at the state level and hence needs to be planned carefully for their successful implementation. In this regard, it is, therefore, of utmost importance to study and examine the various experiences for evolving effective strategies for future.

In order to provide state of art technology based quality assurance services to its valuable clients and to align with DEIT mandate-to focus on IT and e-governance sector, STQC is providing quality assurance and conformity assessment services in IT and e-Governance Sector since 1999. STQC supports Government of India’s National e-Governance   Plan (NeGP) for overall growth of e-governance within the country. STQC has developed e-Governance Conformity assessment and Quality Assurance framework.
e-Governance in India has steadily evolved from computerization of Government Departments to initiatives that encapsulate the finer points of Governance, such as citizen centricity, service orientation and transparency. Lessons from previous e-Governance initiatives have played an important role in shaping the progressive e-Governance strategy of the country. Due cognizance has been taken of the notion that to speed up e-Governance implementation across the various arms of Government at National, State, and Local levels, a programme approach needs to be adopted, guided by common vision and strategy. This approach has the potential of enabling huge savings in costs through sharing of core and support infrastructure, enabling interoperability through standards, and of presenting a seamless view of Government to citizens.

Share
Facebook
Twitter
Pinterest
WhatsApp
Linkedin
ReddIt
Email
Tumblr
Previous article
“The woman is still required to play a dual role – of managing the family and her career, and this is a balancing act”
Next article
“Barracuda Offers Industry-leading, Efficient and Cost-effective Solutions”