DRAM Prices Projected to Enter Period of Downswing in 2022 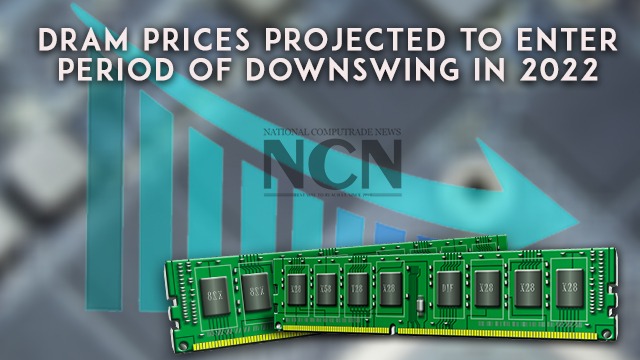 The shortage of components has been one of the major issues and has led to the decline of production of cars, many components in hardware. The semiconductor chip shortage is hamstringing the production of products and it is likely to extend into 2022 and potentially beyond that.

In this scenario, DRAM contract prices are likely to exit a bullish period that lasted three quarters and be on the downswing in 4Q21 at a QoQ decline of 3-8%, according to TrendForce’s latest investigations. This decline can be attributed to not only the declining procurement activities of DRAM buyers going forward, but also the drop in DRAM spot prices ahead of contract prices. While the buying and selling sides attempt to gain the advantage in future transactions, the DRAM market’s movement in 2022 will primarily be determined by suppliers’ capacity expansion strategies in conjunction with potential growths in demand.

The capacity expansion plans of the three largest DRAM suppliers (Samsung, SK hynix, and Micron) for 2022 are expected to remain conservative, resulting in a 17.9% growth in total DRAM bit supply next year. On the demand side, inventory levels at the moment are relatively high. Hence, DRAM bit demand is expected to grow by 16.3% next year and lag behind bit supply growth. TrendForce therefore forecasts a shift in the DRAM market next year from shortage to surplus.

Total DRAM bit supply is projected to grow by 17.9% in 2022 in light of DRAM suppliers’ low inventory levels

As buyers expanded their DRAM procurement in 1H21 in response to supply chain disruptions, DRAM suppliers were able to register better-than-expected shipment performances and reduce their inventory levels considerably. These suppliers are now bullish on the growth of DRAM bit demand generated by the resurging server market. In particular, while Samsung and SK hynix have marginally increased their wafer input for DRAM products, DRAM suppliers’ process technologies are continuing to migrate towards the 1Z nm and 1alpha nm nodes. TrendForce therefore expects total DRAM bit supply to increase by 17.9% YoY in 2022.

Most of Samsung’s wafer input growth takes place in the P2L fab, which houses relatively large physical spaces. As the prevailing market leader, Samsung will likely continue to increase wafer input for DRAM products going forward. The company’s DRAM bit supply growth for 2022 is expected to reach 19.6%, the highest out of the three dominant suppliers, despite the relatively modest growth in Samsung’s current wafer input, most of which comes from advanced process technologies. It should also be pointed out that Samsung’s newest fab P3L is expected to be fully built by mid-2022. P3L will likely contribute to DRAM production by a limited amount next year but continue to provide further growth for Samsung’s DRAM supply after 2023.

Given the bear market for DDR3 memory, SK hynix will likely speed up the reallocation of wafer capacity from DRAM to logic IC products at its old M10 fab next year. After kicking off DRAM production at its newest M16 fab this year, SK hynix will see its total production capacity for DRAM chips continue expanding in 2022, although the company will also adjust its DRAM output according to the state of the market. SK hynix is currently focused on raising the yield rates of its 1Y nm and 1Z nm process technologies, which will contribute to the forecasted 17.7% increase in SK hynix’s total DRAM bit supply next year.

The latest expansions at Micron’s A3 fab are primarily undertaken as a safeguard against possible wafer losses during the fab’s upcoming transition to next-gen process technologies. Hence, Micron’s total production capacity will unlikely undergo drastic changes for the 2021-2022 period, and growths in its DRAM bit output will be mostly derived from the increased yield of the 1Z nm and the latest 1alpha nm process technologies. In addition, DRAM products manufactured with Micron’s 1alpha nm process technology have been widely adopted by clients, and Micron has been making the fastest progress in terms of process technology migration among the three largest DRAM suppliers. The company is expected to increase its DRAM bit supply by 16.3% next year.

The smartphone, server, and notebook computer segments comprise the three largest sources of DRAM consumption. All three product categories have been seeing tremendous growth in 2021, thereby resulting in a high base period for comparison against next year’s figures, meaning that significant YoY growths in these products’ production and shipment, and subsequently their DRAM consumption, for 2022 are unlikely to take place. Furthermore, the ongoing shortage of components has continued to affect various industries and constrain device assembly, leading to a decline in demand for DRAM, since OEMs/ODMs are carrying a relatively high level of DRAM inventory. For 2022, DRAM bit demand is expected to increase by only 16.3% and lag behind DRAM bit supply.

Regarding smartphones, while the shortage of key components such as chipsets and driver ICs remains unresolved, total smartphone shipment for 1Q22, which is already a period of cyclical downturn, will fall below expectations. Although the upcoming release of new models is expected to bring about quarterly increases in smartphone production, TrendForce’s current forecast indicates an annual production volume of about 1.4 billion units for 2022, a modest 3.5% YoY growth. This forecasted figure will likely be subject to additional declines if the shortage of semiconductor components extends further. As such, the main growth driver of mobile DRAM demand in 2022 is expected to be the increase in “content per box” (which refers to the total DRAM contained within each individual handset). For 2022, mobile DRAM will account for approximately 40% of total DRAM bit consumption; there will likely be a 15% increase in mobile DRAM bit demand as well. This increase represents a relatively sluggish performance, as mobile DRAM demand generally increased by more than 20% YoY in previous years.

The server industry likewise faced supply chain-related issues, including disruptions in server assembly operations based in Southeast Asia, as well as shortages of PMICs and passive components. With these issues projected to persist through 2022, total server shipment is expected to increase by 4.3% in 2022, primarily thanks to CSPs’ data center expansions. On the other hand, the rise in Intel Ice Lake CPUs’ market share this year has led DRAM suppliers to manufacture more high-density dies (16Gb mono die) due to the server market’s surging demand for 64GB modules. Once Intel’s next-gen Xeon server CPUs, Sapphire Rapids, enter the market next year, the penetration rate of 64GB server DRAM modules is expected to surpass 60%. Hence, server DRAM bit demand is projected to increase by 20% in 2022, the highest among all DRAM product categories.

Annual shipment of notebook computers for 2022 is projected to reach 222 million units, a nearly 7% YoY decrease, owing to increased vaccination rates in Europe and North America. However, as WFH and distance education become the norm, annual notebook shipment will undergo some growth in the medium to long term, without falling back down to pre-pandemic levels. Although Chromebooks remained the fastest-growing product category among all notebooks in 1H21, demand for Chromebooks has been steadily declining in 2H21 due to the increased Chromebook inventory carried by distribution channels in response to high demand for educational notebooks in 1H21. Instead, demand has shifted to commercial notebooks, which are equipped with more DRAM capacity, and this shift will persist through 2022. Total PC DRAM bit demand is expected to increase by more than 15% next year.

On the whole, DRAM suppliers have performed exceptionally well this year in terms of bit shipments thanks to OEMs’ energetic stock-up activities. The annual total revenue of the DRAM industry is also projected to surpass US$90 billion in 2021 because of the price uptrend and the growth in bit shipments. However, the DRAM market will begin to see prices falling in 4Q21 and a sharpening downtrend in 1H22. The overall ASP of DRAM products for the whole 2022 is projected to register a YoY drop of 15-20%. On the other hand, the YoY growth rates of DRAM suppliers’ bit shipments will also be within a similar range for next year. This means that the bit shipment growth will mostly offset the price decline, thereby keeping the total DRAM revenue for 2022 at a similar level to this year. There are still uncertainties as to the movements of DRAM prices during 2H22. If prices manage to rally, then the annual total DRAM revenue may again reach a new high. 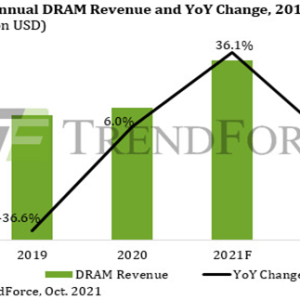