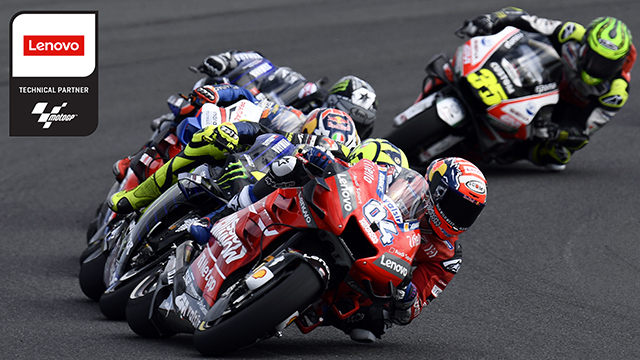 Lenovo has signed a multi-year sponsorship deal with Dorna, the exclusive holder of the commercial and television rights for the MotoGP World Championship. With millions of viewers worldwide and19 MotoGPrace weekends each season in 16 countries, the partnership gives audiences strong exposure to Lenovo.

Effective for the rest of the 2019 season and continuing into 2020, Lenovo will be the key technology partner for Dorna, which will include equipping staff with Lenovo PCs, desktops, laptops, workstations, tablets, monitors, and data center solutions.

Gianfranco Lanci, Chief Operating Officer for Lenovo, said: “MotoGP is on its way to becoming the largest spectator sport in the world; Dorna will use Lenovo’s technology to push the limits of motorsport coverage to make it the most entertaining to watch from nearly any enabled location around the world. We’re delighted about the opportunity to have Lenovo products at the heart of transforming how spectators enjoy the excitement of MotoGP on big and small screens, but also, the brand visibility the partnership will drive.”

The partnership also includes signature branding opportunities for the Lenovo logo to be inserted on graphics whenever viewers see telemetric and performance information shared on-screen, as well as to have banners in pit lane at each track. Additionally, the agreement ensures those real-life branding elements are replicated in the MotoGP19 video game, which launches worldwide on June 6, 2019. Gamers competing in Dorna’s MotoGP eSport Championship will preview the new video game as they face-off on Lenovo PCs at Italy’s Mugello Circuit. A separate agreement named Lenovo as exclusive partner in its product category of the MotoGP eSport Championship.

In the highly technical world of motorsport, MotoGP encourages TV and online fans to become part of the racing experience and understand the engineering behind each bike’s performance. Leading-edge technology has become an essential tool required for riders competing in MotoGP, but also to offer viewers a more attractive and informative broadcast experience by emphasizing the real-time performance data shared during the broadcast.

Dorna uses cutting-edge technology to capture and transmit high-speed refreshed images from the hundreds of HD cameras on the bikes and covering the track. From day-to-day office operations to analyzing computations from high-tech sensors, like the gyroscope 4K cameras on each bike, the collaboration with Lenovo will enable Dorna engineers to explore new ways of packaging video in dynamic formats, allowing TV viewers to see what’s happening in the moment, from all angles.

Dorna CEO Carmelo Ezpeleta added: “We are extremely happy to extend our partnership with the world’s number one company in computing. Besides the strong partnership Lenovo has with Ducati and the MotoGP eSport Championship, this new agreement demonstrates Lenovo’s commitment to making MotoGP even better as a sport, thanks to the contributions of their top-quality devices.”

Later this season, Lenovo expects its technology solutions will aid in the fast refresh transmission of images so spectators can engage with the rider’s surroundings by clicking or tapping their PC, tablet or smartphone screen to view visual extras such as, slow-motion rider shots, 360-, 180- and 60-degree angle shots of the bike and from the rider’s perspective.