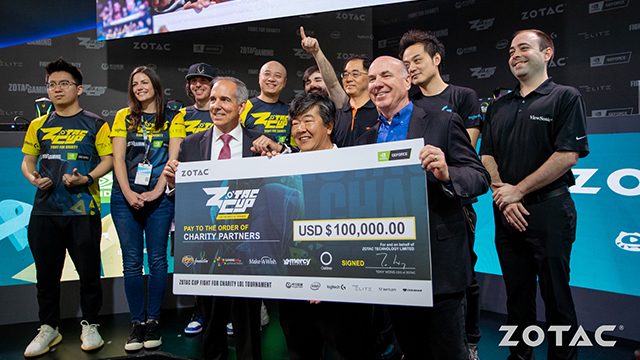 ZOTAC Technology is thrilled to announce that the Grand Finals of ZOTAC CUP Fight For Charity League of Legends (LOL) Tournament kicks off at COMPUTEX Taipei with a grand opening ceremony converging all the finalists, including top streamers like CooLifeGame from Spain, Guan Zong and Hao Kai from China, Voyboy and Kaypea from North America.

The final showdown features a charity prize pool of $100,000 USD, which will be donated towards charity organizations worldwide, and will be live-streamed via ZOTAC CUP’s Twitch channel, Huya and official Microsite with multiple languages available. Amazing talents and casters including Jake ‘Spawn’ Tiberi, Matthew ‘Fish’ Stewart and Rikki ‘Riku’ Quiapon will provide commentary on all the action onsite and audiences worldwide.

Since the April online qualifiers throughout Asia, Europe and Americas via the ZOTAC CUP Online Tournament Platform, the best nine LOL players have advanced to the Semi Finals stage on May 28-29. They were met by popular local influencers MMD, Eggroll, 7Z, WeiWei, Toyz and Gear to compete for 5 coveted spots in the Grand Finals, where the top international streamers await. All the 10 finalists will compete to raise funds to help support Esports Foundation US, Gaming-Aid, Make-A-Wish Foundation, Mercy Malaysia, and Oaktree Foundation.

“As an industry leader, we are excited to take the lead in encouraging the gaming community to create positive impacts. This year is very special because we have many talented individuals allocating their time, only with the aim to help make a difference. We also thank our partners NVIDIA, HUYA, Intel, Logitech Gaming, ViewSonic, COUGAR, and Battlefy for providing their support,” said Tony Wong, CEO of ZOTAC Technology.

Chinny Chuang, ZOTAC Global Director of Marketing added, “Our charity partners have also set up their own donation page to accept international donations, enabling our global audience the ability to directly make contributions to support their favorite LOL streamer and charities.”

ZOTAC GAMING will provide the official gaming system – the all-new 9th generation MEK MINI. The ultra compact desktop gaming PC is powered by a ZOTAC GAMING GeForce RTX 2070 graphics card and a 9th generation Intel Core i5 processor, so all players on stage can push their skills. The ZBOX Streaming Mini PC, powered by an Intel Core processor and pre-installed with Streamlabs OBS and a Avermedia M.2 video capture card, will tether with the MEK MINI allowing the player to play and livestream simultaneously during the tournament event.