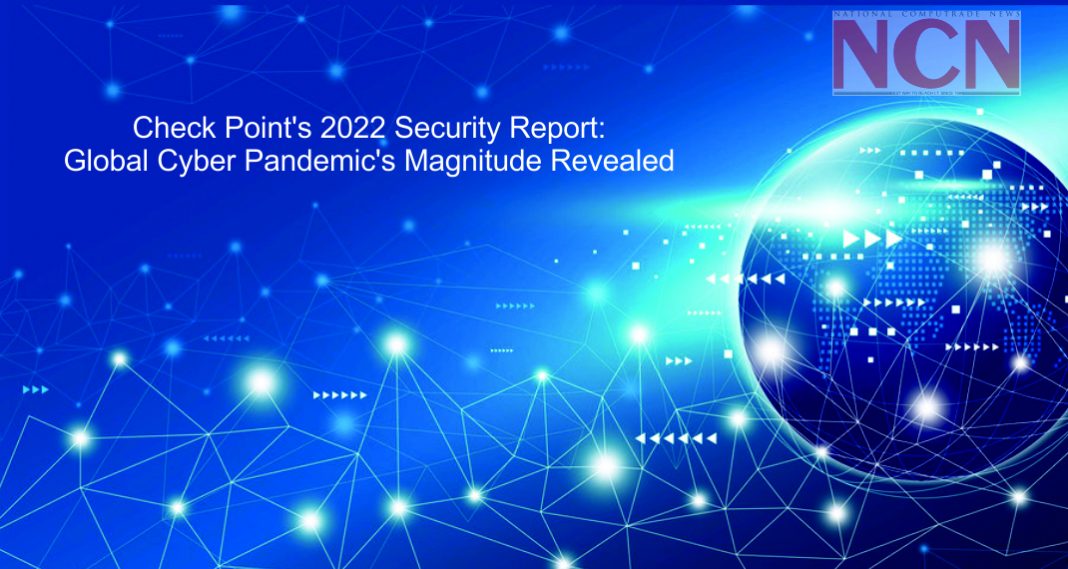 Check Point Research (CPR), the Threat Intelligence arm ofCheck Point Software Technologies Ltd, a leading provider of cyber security solutions globally, has released its 2022 Security Report. From the SolarWinds attack at the beginning of the year, which presented a whole new level of sophistication and spread, all the way through to December and the influx of Apache Log4j vulnerability exploitations, the 2022 Security Report reveals the key attack vectors and techniques witnessed by CPR during 2021.

Overall in 2021, organizations experienced 50% more weekly cyber-attacks than in 2020. With the Education/Research sector’s 1,605 weekly attacks taking the lead (75% increase). This was followed by Government/Military with 1,136 weekly attacks (47% increase) and Communications with 1,079 weekly attacks (51% increase). Software vendors experienced the largest year-on-year growth (146%) which goes hand-in-hand with the ever-increasing trend of software supply chain attacks observed in 2021. This last year has also seen evolving attacks on mobile devices, increase in major cloud services vulnerabilities, and the return of the notorious Emotet botnet. Highlights from the 2022 Security Report include:

Supply chain attacks: the infamous SolarWinds attack laid the foundations for a supply chain attack frenzy. 2021 saw numerous sophisticated attacks such as Codecov in April and Kaseya in July, concluding with the Log4j vulnerability that was exposed in December. The striking impact achieved by this one vulnerability in an open-source library demonstrates the immense inherent risk in software supply chains.

Cyber-attacks disrupting everyday life: 2021 saw a large number attacks targeting critical infrastructure which led to huge disruption to individuals’ day-to-day lives, and in some cases even threatened their sense of physical security.

Cloud services under attack: Cloud provider vulnerabilities became much more alarming in 2021 than they were previously. The vulnerabilities exposed throughout the year have allowed attackers, for varying timeframes, to execute arbitrary code, escalate to root privileges, access mass amounts of private content and even cross between different environments.

Developments in the mobile landscape: Throughout the year, threat actors have increasingly used smishing (SMS phishing) for malware distribution and have invested substantial efforts in hacking social media accounts to obtain access to mobile devices. The continued digitization of the banking sector in 2021 led to the introduction of various apps designed to limit face-to-face interactions, and those in turn have led to the distribution of new threats.

Cracks in the ransomware ecosystem: Governments and law enforcement agencies changed their stance on organized ransomware groups in 2021, turning from preemptive and reactive measures to proactive offensive operations against the ransomware operators, their funds and supporting infrastructure. The major shift happened following the Colonial Pipeline incident in May which made the Biden administration realize they had to step up efforts to combat this threat.

Return of Emotet: One of the most dangerous and infamous botnets in history, is back. Since Emotet’s November return, CPR found the malware’s activity to be at least 50% of the level seen in January 2021, shortly before its initial takedown. This rising trend continued throughout December with several end-of-year campaigns, and is expected to continue well into 2022, at least until the next takedown attempt.

“In a year that began with the fallout from one of the most devastating supply chain attacks in history, we’ve seen threat actors grow in confidence and sophistication,” said Maya Horowitz, VP Research at Check Point Software. “This culminated in the Log4j vulnerability exploit which, yet again, caught the security community off-guard and brought to the fore the sheer level of risk inherent in software supply chains. In the months between, we saw cloud services under attack, threat actors increasing their focus on mobile devices, the Colonial Pipeline held to ransom, and the resurgence of one of the most dangerous botnets in history.”

Maya continued: “But it’s not all doom and gloom. We also saw cracks in the ransomware ecosystem widen in 2021, as governments and law enforcement agencies around the world resolved to take a tougher stance on ransomware groups in particular. Instead of relying on reactive and remedial action, some shocking events woke governments up to the fact that they needed to take a more proactive approach to dealing with cyber risk. That same philosophy extends to businesses too, who can no longer afford to take a disjointed, siloed, reactionary approach to dealing with threats. They need 360-degree visibility, real-time threat intelligence, and a security infrastructure that can be mobilized in an effective, joined-up manner.”

Cyber Attack Categories by Region in 2021:

Average weekly attacks per organization, by industry 2021, compared to 2020:

The ‘Cyber Attack Trends: 2022 Security Report’ gives a detailed overview of the cyber-threat landscape. These findings are based on data drawn from Check Point Software’s ThreatCloud Intelligence between January and December 2021, highlighting the key tactics cyber-criminals are using to attack businesses.