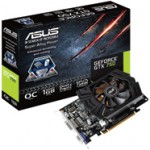 They also include GPU Tweak, an easy-to-use tuning software that helps users to squeeze every last drop of performance out of their graphics card and stream on-screen action over the internet in real time — great for boasting rights. GTX 750 has a 1059MHz overclocked base clock that runs as fast as 1137MHz when boosted, while the GTX 750 Ti flies along with a 1072MHz overclocked base clock that ratchets all the way up to 1150MHz when boosted — so the latest 3D games can be enjoyed at very high detail levels of up to 2560 x 1600 pixels with no slowdown. Both GTX 750 Ti and GTX 750 benefit from a unique fan design and layout that dissipates heat efficiently while offering highly-effective resistance to the intake of dust and other particulates.

GTX 750 has one of these dust-proof fans, while GTX 750 Ti is cooled by two — extending both cards’ lifespan by up to 25% compared to reference designs. GTX 750 Ti’s dual dust-proof fans improve airflow by up to two times (2X) compared to the reference design, for even better cooling. The new cards also feature exclusive ASUS Super Alloy Power components. Super Alloy Power’s concrete-core chokes and hardened MOSFETs withstand much greater stress and heat thanks to the application of specially-formulated materials, while minimized power loss, enhanced durability and cooler operation ensure that GTX 750 Ti and GTX 750’s components last much longer than references — up to two-and-a-half (2.5X) times longer, in fact.